Can the JOBS Act Jump-Start Entrepreneurship? 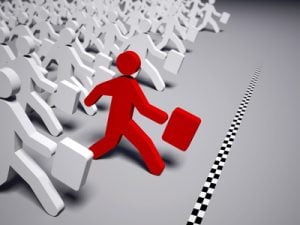 Rep. Patrick McHenry (R-N.C.), a staunch advocate of crowdfunding and contributor to the #FixYoungAmerica campaign to promote youth entrepreneurship, believes it can.

Businesses can’t raise money through crowdfunding in a meaningful way right now because of federal restrictions and red tape. McHenry wants to change that. A bill he introduced to near-unanimous support in the House became part of the foundation for the JOBS Act, which has been passed by Congress and awaits President Obama’s signature.

McHenry says he’s fed up with the pattern of entrepreneurs being forced to finance their projects through their own lines of credit, sometimes backed by the value of their homes. He sees two problems with this way of doing things: First, it can be difficult to get credit, and second, the value of many homes tanked during the financial crisis of 2007-2008, making mortgage-backed financing a much weaker option for capital-seeking entrepreneurs.

“The result of these realities is plain and simple,” writes McHenry in his chapter for the #FixYoungAmerica book. “Countless young, ambitious entrepreneurs are out of luck as they look for capital to expand and compete on the open market.”

Crowdfunding, says McHenry, is the solution to those problems. It would allow entrepreneurs to raise money from many different investors, each pitching in a small amount compared to angel investors and their giant checks. Theoretically, that mitigates the risk of investment for each contributor.

McHenry first became aware of the concept after reading a letter written by Rep. Darrell Issa (R-Calif.). Issa, a former technology CEO, is one of the most technologically astute members of Congress. In the letter, he wrote 33 questions to the chair of the U.S. Securities and Exchange Commission, which regulates the U.S. stock market.

“Serving as chairman of the House Oversight Subcommittee for issues related to financial services and banking regulations, I had the luxury of reading this letter before the ink had dried,” writes McHenry. “I soon realized I was flipping through the pages of a letter that would transform the way Congress prioritized capital formation.”

One particular question caught McHenry’s attention: Would the SEC allow small businesses to engage in crowdfunding?

Crowdfunding, says McHenry, piqued his interested because it reminded him of the way political campaigns raise money — often, from lots of donors giving small donations (PACs aside, of course).

McHenry threw his energy into researching crowdfunding as a mechanism for investing in small businesses. To learn more, he went to websites such as IndieGoGo, which lets people raise money from “the crowd” for charities, businesses and other projects. Eventually, McHenry was convinced that crowdfunding was part of the solution to drag America out of its economic slumber.

“I was becoming a diehard fan of crowdfunding, especially since it utilized online technology to increase small business access to new sources of financing,” writes McHenry. “Social networks were not just for keeping up with friends — they could become marketplaces for everyday investors and entrepreneurs.”

After McHenry introduced his Entrepreneur Access to Capital Act, he used a House Financial Services Committee hearing about it to spark a conversation on the Hill about crowdfunding.

“As each witness spoke,” writes McHenry, “members and staff began to gain interest in crowdfunding, a form of capital formation that was foreign to them that very morning.”

The idea was met with some resistance from McHenry’s colleagues who believed crowdfunding was too risky of an investment platform. McHenry, though, says that dispute was a blessing in disguise — it got entrepreneurs fired up and focused on explaining why the status quo wasn’t working.

Eventually, the Financial Services Committee unanimously approved the bill and sent it to a full vote in the House. It sailed through on a 407-17 bipartisan vote, after receiving President Obama’s blessings in a jobs speech. McHenry’s bill was then included in a larger small businesses reform package — the JOBS Act — which has been sent to the White House for the president’s signature.

“After observing how quickly our nation’s leaders were able to learn and embrace a new and democratic form of capital formation,” writes Rep. McHenry, “I am more confident than ever that the U.S. will once again retain its title as the world’s most dynamic and entrepreneurial marketplace.”

Do you think crowdfunding is a viable way to jumpstart American investment and growth?