A Little Tweet Goes a Long Way With Advertisers 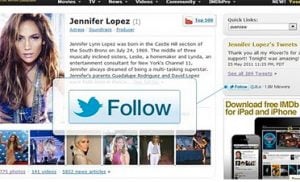 With a global audience, Twitter has managed to triple its ad revenues this year, as it takes on the same clients as Facebook and Google.

Despite a smaller audience than other social-networking platforms, Twitter has managed to, in some cases, beat Facebook when it comes to ad engagement, and it’s also expected to benefit from a global ad revenue boost over the next few years.

Twitter will earn $139.5 million in global ad revenues this year, up 210 percent from the $45 million it raked in for 2010, as it vies for the same clients as Facebook and Google, according to a new forecast released today by eMarketer. That’s down from eMarketer’s previous estimate of $150 million, which it made in January 2011, but it’s not for lack of potential. Rather, it has to do with Twitter’s slower-than-expected rollout of several advertising initiatives, including ad sales offices in non-U.S. markets and a platform that lets advertisers buy ads on a self-serve basis.

By 2013, the microblogging site’s worldwide ad revenues are expected to reach $400 million, according to the report, issued today.

That growth is expected to be fueled in part by non-U.S. advertising, which is expected to account for 12 percent of all revenues by 2013, versus 4 percent in 2011. The other half of the equation: the expected addition of self-service ad buying, which will appeal to small and midsize businesses.

What’s more, the number of people actually clicking on the ads on Twitter is giving Facebook, which reportedly brought in $1.6 billion in revenue in the first half of 2011 alone, a combination of advertising and its cut of virtual goods, a run for its money.