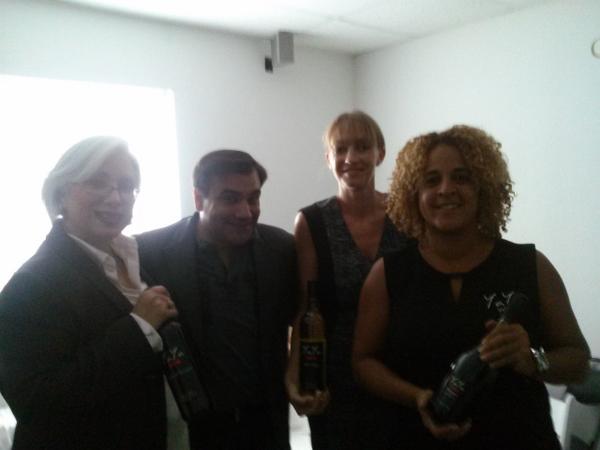 A government job, a stint in the U.S. Army, red wine from Chile and a restaurant napkin helped put Miami entrepreneur YaYa LeGrand on an unconventional path to small business ownership. LeGrand, who spent over two decades working for Miami-Dade County government, is a determined businesswoman with a lofty goal: seeing her product, YaYa Wines, on Publix and Winn-Dixie shelves by the end of next year.

LeGrand’s journey began with vacations her mother, Kathleen, took to Chile when she was a teenager. “My mom would go to Chile and bring back these red wines with interesting designs on the bottles,” LeGrand said. “When I got older, I could actually drink the wine and it was delicious.”

After a career that included four years in the military and another 20 working for Miami-Dade County in a security-management role, LeGrand retired — and was finally able to realize her dream of starting her own business.

LeGrand had already come up with a name for her new wine a few years before she retired — YaYa Wines. “The name and logo actually came out of a meal I had at a restaurant with a friend,” LeGrand said. “I started doodling on a napkin and ended up drawing three hearts on a napkin with my name above them.”

That became the label that adorns her wine bottles. LeGrand then set about creating a wine that reminded her of the Chilean varieties her mother had brought home. “After checking out vineyards in California’s Napa Valley and Sonoma, LeGrand went with Brotherhood, America’s oldest winery. Brotherhood, in Washingtonville, New York, was established in 1839.

“At Brotherhood, I was able to find the perfect wines that were so reminiscent of what my mother found in Chile,” LeGrand said. “It’s a great partnership that we have.”

In just over three years, LeGrand has grown YaYa Wines into a product that is sold in more than 60 retail locations in South Florida including Milam’s Market in Miami. But she has not reached her ultimate goal of getting YaYa Wines into Publix and Winn-Dixie.

Today, YaYa Wines generates over $65,000 in annual sales. LeGrand is hoping to triple her sales over the next year if she is able to achieve her goal of seeing Ya-Ya Wines on major supermarket shelves. To do that, LeGrand asked the Miami Herald for a Small Business Makeover.

The Herald enlisted the help of the Miami chapter of SCORE. SCORE reached out to three counselors to help LeGrand determine what she needs to do: Hilary Metz, Nora Adler and Orlando Espinosa (details in box).

At the first meeting LeGrand had with the SCORE counselors, she outlined her goal. She also explained that before working with SCORE for the makeover, she was in the process of applying to a Publix program that helps minority and women-owned businesses interested in bringing their products to store shelves. SCORE counselors worked with LeGrand to develop a plan, but first, she had to protect her intellectual property. “YaYa had a federal trademark that she applied for years earlier,” Metz said. “But she wasn’t using it. So we had to change that to make sure she was protected.”

Another problem LeGrand faced was securing reliable distribution for her product. “A big part of YaYa’s success is going to be in distribution,” Adler said. “It’s great to have her wines in a few Milam’s Markets and small liquor stores, but to propel her forward and grow the business, she needed to secure strong distribution with a company that could give her exposure to regional and national grocery store chains.”

Distribution alone wasn’t going to get LeGrand where she wanted to go, however. “YaYa is great because she is her brand,” Espinosa said. “But she needed to position herself better as the face of it, which meant getting out there and pounding the pavement to achieve the success she envisioned.”

To point her in the right direction, the SCORE team had the following advice:

Protect the intellectual property owned by the business: “One of the main things that YaYa needs to do here is start using her federally registered trademark,” Metz said. “If you look at the wine bottles, they don’t have the ‘R’ with the circle around it next to YaYa Wines, which indicates that the brand is protected. This is not a good thing and something that needs to be corrected as soon as possible.”

According to Metz, using the registered trademark symbol is important for several reasons: “There are a host of benefits that come with trademark protection that allow you to prevent others from using it and to collect damages if they do.”

Metz said many small business owners don’t know the difference between a trademark and copyright: “Copyright applies to things like songs and literary works. Trademarks apply to things like logos and symbols. In this case, the name YaYa Wines and the three hearts that make up her logo are trademarked.”

Metz told LeGrand that using your federally registered trademark also adds value to your brand. “If YaYa were to partner with a distributor or try to seek financing for her business, those companies know that they are investing in a brand that is fully protected and that they won’t be sued or entangled legally by doing business with YaYa Wines,” Metz said.

Partner with a reputable distributor to get exposure to major chain supermarkets: The SCORE counselors encouraged LeGrand to partner with a distributor she could trust with the connections to get her brand regional and national exposure. LeGrand had worked with several distributors over the years. “In the wine business, distribution is essential to success,” Adler said. “It’s important to partner with a company that has a strong track record.”

A chance posting on Facebook led LeGrand to KeHE Distributors, a company based in Naperville, Illinois. “A friend of mine posted something on Facebook about wine,” LeGrand said. “That led to me discovering that I knew someone who worked for KeHE, and we started talking about my business.”

LeGrand is working with KeHE to secure distribution in South Florida supermarket chains like Sedano’s, Publix and Winn-Dixie.

Foster relationships with wine buyers, store managers and others in the industry: Adler reminded LeGrand that even with distribution, bringing a wine to the mass market isn’t easy. “Securing distribution is really only half of the battle,” Adler said. “YaYa needs to keep herself and her brand on people’s radars.”

To do that, Adler recommended fostering relationships with wine buyers. “YaYa should not rely on a distributor to do marketing for the brand,” Adler said. “She needs to also take the bull by the horns and get her brand in front of wine buyers. The individual wine buyers and store managers are the ones who have the final say as to whether a product goes on the shelves in their stores.”

Become the brand: “YaYa Wines is a brand that centers around its creator,” said Espinosa, who met LeGrand several years ago at a SCORE workshop. “When you have a brand like that it’s important to make sure that you are out there constantly promoting yourself, and by extension, your brand.”

Espinosa recommended that LeGrand create opportunities for people to experience YaYa Wines. “I think that once people taste the wine, they will love it and tell others about it,” Espinosa said. “YaYa needs to organize wine tastings, raffle off bottles of wine for charity and get involved in high-profile events around town that will raise her profile.”

He also urged her to grow her presence on social media. “Ya-Ya has about 150 followers on Twitter and needs to strengthen her presence on Facebook and Instagram,” Espinosa said. “With a brand like hers that is fun and hip, social media is an inexpensive tool to help drive people to it.”

LeGrand is taking the SCORE counselors’ advice and working hard to make her dream a reality.

How to apply for a makeover

Business Monday’s Small Business Makeovers focus on a particular aspect of a business that needs help. Experts in the community will provide the advice. The makeover is open to full-time businesses in Miami-Dade or Broward counties open at least two years. Email your request to rclarke@MiamiHerald.com and put “Makeover” in the subject line.

Based in Washington, D.C., SCORE is a nonprofit with more than 12,000 volunteers working out of about 400 chapters around the country offering free counseling to small businesses. There are seven chapters on Florida’s east coast, including SCORE Miami-Dade, with more than 90 volunteer counselors. Counselors from SCORE Miami-Dade meet with small business owners and offer free one-on-one counseling as well as dozens of low-cost workshops. To register or see more, click on “Local Workshops” on miami-dade.score.org. To volunteer or learn more about SCORE, go to www.score.org or www.miamidade.score.org.

The challenge: Developing a plan to successfully grow the business by getting the wines on Publix and Winn-Dixie store shelves.

The experts: SCORE Miami-Dade counselor Orlando Espinosa, co-founder of Emineo Media, has more than 25 years of experience in branding and social media. Nora Adler is a marketing consultant who specializes in the wine business. Hilary Metz is an intellectual property and trademark attorney whose business specializes in helping business owners protect themselves against infringement.

The results: In just over a month, the SCORE team developed a plan for LeGrand. They showed her how to protect her brand, gain exposure to the major supermarket chains she was targeting and how to increase the buzz for her brand by attending events, hosting wine tastings and networking. They showed her how to develop a strategy to maximize her social media online presence. They also helped LeGrand figure out what she needed to do to find a reputable distributor for her products.