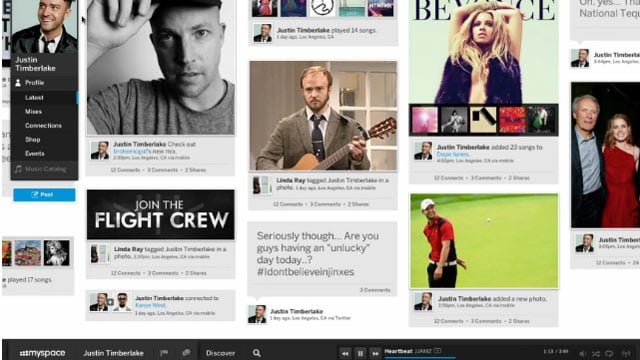 The new MySpace certainly looks nice. Gone are the eye-jarring profiles and clunky navigation. Today’s MySpace is all about the visual/aural experience. With side scrolling, lots of whitespace and ease of navigation, one has to wonder how this site would be hailed if it were new and not just an incarnation of a site that wore out its relevancy some years ago. Our friend Tom no longer around – Specific Media Group and Justin Timberlake bought MySpace for 35 million dollars in 2011 – we’re no longer looking at a place where you go to hook up new people. Instead, you’re hooking up with music. Think of it as Pinterest for your ears. The new MySpace is completely music-centric, focusing on connecting fans and artists. Fans can “connect” with songs and use those connections to build playlists and radio stations (ala Pandora) and listen to their collected music in the ever present streaming player on the bottom of the site. Musicians can use MySpace to track where their fans are, what they are listening to and how often.

It’s a pretty, fascinating site. But one has to wonder if it will take hold, given the joke status MySpace has taken in since its popularity waned. Once the place for musicians to exist on the Internet, it faltered and sputtered as twitter and Facebook offered new, better and easier ways to connect with fans. Will MySpace be able to regain the audience it previously had and if it does, will it regain the loyalty necessary for a site to survive where others are already thriving

“[W]ith every obstacle comes an opportunity and I see this, as it speaks to somebody like me, as bridging the gap,” Timberlake said. “It’s just bringing the connection that much closer while still making the artist feel comfortable that they can make their art, lock themselves in a room and torture themselves as they do, and still find a way to comfortably connect with their fan base.”

In other words, the artists can connect with their fans without actually connecting with them. Unlike twitter, the new MySpace is all media, no social. You can “like” things by connecting with them, but there’s no interpersonal relationships here, no bantering between fans and musicians, or even between fans. It’s strictly an exercise in building yet another collection of music to listen to. With Spotify, Rdio, Pandora and Last.fm already doing that, what is going to set MySpace apart from the pack?

But apparently the point of MySpace is that it’s not social.

“You’re not going to see something that’s ‘Myspace 3.0.’ This is not another social network that you have to keep up with and maintain. It’s a totally new experience, one that delivers on three things: Design, discovery, and insights for our community that actually empowers them,” says [owner] Tim Vanderhook. “Overall, what you’re going to see is that design matters. We wanted to deliver something that was visually stunning … and we wanted to give tools to the artist community that really help them.”

Will design be enough? Without the lure of interaction, the novelty of a new, prettier MySpace might wear off. There are some instances where intuitive design would be enough to hook users, but when it comes to making connections, people might want more than the superficial. One of the greatest things about music lies in sharing it and talking about it. There’s no room for that here, so it all comes off as scratching the surface of what could be something spectacular. If you want to just collect music and make playlists, Spotify and Rdio do that well enough already. Unless you’re a Pinterest-type person who just likes to curate, the resurgence of MySpace might very well mean nothing to you.

While Google quickly became a mega-giant in the search world, it never did quite reach the success in social media it wanted. It sure didn’t come anywhere close to Facebook. Here is a look back at Google’s forays into the social media revolution.

The world of social media has collected billions of users world wide. Whether you use Twitter or Facebook, you are still tuning and and communicating through social media. Here is a look at the frenzy of activity that goes on every second on social media websites.