What Do Small Businesses Do on Social Media?

Facebook and Twitter are still the most popular networks that small businesses are using, coming in at 90% and 70% respectively. Although LinkedIn, Google+, and Pinterest are touted as must-use networks in social media marketing, a majority of small businesses, according to the survey, don’t use these sites at all. Of all the things small businesses could do on social media, it turns out that finding and posting content takes the most time, followed by learning and education (presumably this means learning how to use the social network, the survey isn’t clear) and analyzing efforts. The least time consuming task was responding to questions.

Six hours a week is a lot, and many small businesses are struggling with the work load and the time it takes to manage multiple networks. The survey doesn’t say a whole lot on how small businesses spend these six, eight, 12 hours a week, but there are good ways to spend that time. If you’re spending this much time on social media, and want to be assured that you time is well spend, then here are the things that small businesses ought to be doing: 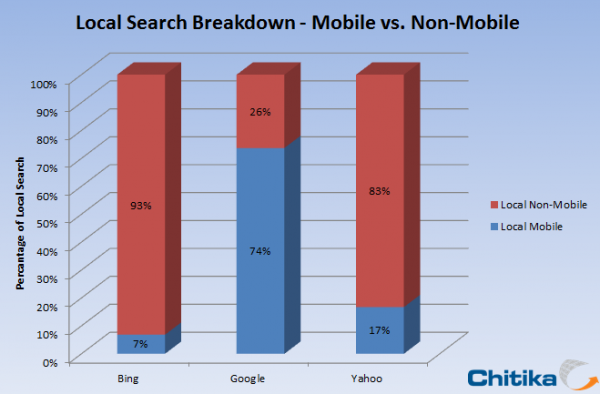 Ad network Chitika has just released some new data — you’re seeing it here first — that compares local search volumes on Google, Yahoo and Bing. The study examined both PC and mobile traffic to determine an overall number. (Chitika has now informed us that these numbers are incorrect; see postscript II below.)

Chitika looked at “millions of online ad impressions seen between September 21st and 27th, 2012.” To ensure it was measuring “local search,” Chitika compared the queries it was seeing from the engines “against its extensive database of local keywords and phrases (e.g. “near me,” “in Boston,” “around St. Louis,” etc.).” What Chitika found was that 43 percent of the overall query volume coming from Google (mobile and PC) carried a local intent. That compared with 25 percent on Yahoo and Bing.

Roughly two years ago Google reported that 20 percent of PC queries “were related to location.” Since that time Google has put considerable effort into its local and map results, both online and in mobile.

Obviously mobile search has raised the overall local percentage reported by Chitika (see postscript below). But these figures argue that local search volumes across engines are now quite massive. Indeed, they represent billions of queries monthly on the PC and mobile web. In addition they’re very high-value queries because local searchers are more likely to covert than others, especially mobile users.

Postscript: I asked Chitika to provide a breakdown of PC vs. mobile search in these findings. Chitika said that nearly three-quarters of Google’s local queries are in fact coming from mobile. It’s the opposite for Bing and Yahoo. However this is logical given that their mobile query volumes are so small compared to their PC volumes and to Google’s mobile search volume. Postscript II: The numbers above are incorrect. Chitika contacted me today and said there was an error in their methodology. It resulted in an inflated Local and Local-Mobile total for Google. They’re providing revised/corrected figures and an explanation of what happened. I’ll do a new post exposing those shortly.