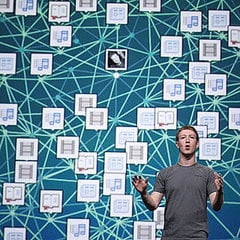 Facing greater pressure to generate ad revenue, Facebook has tapped data miner Datalogix to track whether users who see product ads on the site end up buying them in stores. That said, “the ‘holy grail’ of online measurement has always been tracking to offline sales,” Marketing Land reminds us. “Indeed, 95% of retail sales happen in stores and clicks are often a poor proxy for those in-store activities.”

It’s no surprise, then, that marketers were reportedly clamoring for Facebook to “close the loop” between online purchase intent and offline purchases. “We kept hearing back [from marketers] that we needed to push further and help them do a better job,” Brad Smallwood, Facebook’s head of measurement and insights, tells FT.

“While such access is great news to marketers, privacy advocates wonder whether using Datalogix violates Facebook’s $9.5 million settlement with the Federal Trade Commission over privacy practices,” Mashable writes. “As part of the deal, Facebook must make it clear to users when the social network shares their information beyond what their privacy settings mandate.”

As such, the partnership “has some privacy advocates worried,” Business Journal writes.

At present, Datalogix has purchasing data from about 70 million U.S. households, which it gathers through loyalty cards and similar programms at more than 1,000 retailers.

By matching email addresses — or other identifying information associated with those cards against emails or information used to establish Facebook accounts — Datalogix can track whether consumers eventually buy a product in a store after seeing an ad on Facebook.

Salesforce.com links up with Facebook for targeted ad delivery

IDG News Service – Salesforce.com customers interested in using the vendor’s emerging family of marketing software could benefit from a new partnership it has formed with

Salesforce.com is tying its Marketing Cloud into Facebook’s new custom audience targeting functionality, which will help “marketers reach people they may already have a connection with on Facebook,” according to a Salesforce.com blog post.

First, a user would pick groups of customers from within their Salesforce.com CRM (customer relationship management) system, such as existing customers or prospects, the post states. A list of emails or phone numbers culled from the groups would then be run through a hashing process for security purposes, and compared with information of active Facebook users in order to find matches.

Facebook won’t reveal its users’ identities to the Salesforce.com system. Instead, Salesforce.com users would reach Facebook matches indirectly via the Marketing Cloud, which includes the social advertising system gained through the acquisition of Buddy Media.

In addition, Salesforce.com has become a “strategic” member of Facebook’s Preferred Marketing Developer program, which will “give it early access to pre-launch product tests, and receive levels of product and sales support that Facebook has never offered before,” according to another official blog post.

“Imagine having context into a prospect’s interests, likes and dislikes before walking into a sales pitch — you may even learn what competitors are in the deal,” Data.com senior vice president and general manager Andy MacMillan said in a blog post earlier this week. “Priceless context that will help you strengthen your relationships with customers and close more deals, faster.”

Social media for B2B marketing is similar to its B2C counterpart in some ways. But in other ways, it’s very different. If you want to connect with the executives in your target market, here are the must-have components to your B2B social media plan.