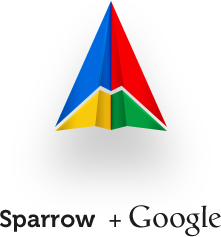 Google has acquired the social email startup Sparrow to put its team to work on improving Google’s own email solution, Gmail.  Sparrow announced the deal to its users on Friday.

We care a lot about how people communicate, and we did our best to provide you with the most intuitive and pleasurable mailing experience.

Now we’re joining the Gmail team to accomplish a bigger vision — one that we think we can better achieve with Google.

Google has already made email more social by connecting Gmail to its other products through Google+ for a more integrated experience.

Sparrow’s email app for Mac computers and iPhones similarly combines the best of both worlds.

The app also connects to Facebook so that messages pop up with the sender’s picture, but it retains the feel of a private inbox.

Sparrow handles large files through Dropbox. (The lack of file-sharing capabilities on social networks is another reason that they haven’t made email obsolete.)

TheVerge reported that Google acquired the company for under $25 million. Although the team will be working on new projects for Google, Sparrow users will still have access to their accounts.